Mrs. D rushed into my office apologetic. “So sorry I’m late”, she said. “I was held up at the principal’s.” The principal’s? Mrs. D is well into her 30s, and her middle school aged son hardly seems to be one that would cause a visit to the principal’s office. And then the details unfolded. 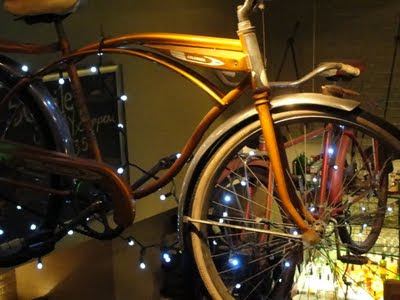 Mrs. D and her son Sean had unknowingly broken with school policy, committing a public school crime. She had allowed Sean to bike to school. And in spite of the presence of bike racks (which one might think suggested that bikes might be allowed on the premises) biking to school is forbidden.
According to the principal, if he allowed Sean to ride his bicycle to school, than there might be 100 students who’d want to ride their bikes to middle school. Imagine that—dozens of middle-schoolers getting more exercise, incorporating biking into their daily routine. The school might even need to get more bike racks.
In theory, the principal appeared to understand. But permission for policy change is only granted by a school committee vote. That is, if it were deemed important enough to land on their meeting’s agenda. And the school committee only meets periodically during the school year. So for now, Sean will need to skip his biking to school, lest he break the rules again.
Why the recent interest in biking anyway?
Several months ago, Sean’s school began its own war on obesity. First, they screened all the kids, evaluating them based on their BMI. (for more thoughts on BMI and its problems, check out http://dropitandeat.blogspot.com/2011/02/where-bmi-goes-wrong-lessons-from-cupid.html) Their weight report cards were then sent home. They were not, by the way, accompanied by a fitness assessment, which might have included measurements of strength or cardio fitness.
Concerned and caring mom that she is, Mrs. D responded to her son’s high BMI by seeking appropriate guidance. And so they presented to me.
Sean has done remarkably well these months since we began working together. He’s eating better and learning to better manage his previously excessive portions, by responding to his physical cues. And he has significantly improved his food choices when dining out; no, he hasn’t given up burgers and fries, but now he might share a single portion of the fries or skip the cheese on the burgers. Those endless sodas at restaurants are now a thing of the past. In addition, this shift toward healthier eating has led to more meals prepared at home—an added benefit for the whole family.
Moving more was also on Sean’s to do list. After brainstorming together Sean and I decided that bike riding would be a fun, manageable activity to help improve his fitness. He began with weekend rides and then suggested biking to school, weather permitting. Yes, Sean was only trying to do well—to eat healthier, be more active and fit, and respond to the school-prompted campaign against obesity in a sensible, practical way. How unfortunate the school was so short sighted about its unhealthy policy.
As a side note, let me tell you a bit about Mrs. D. She has long struggled with anorexia and has also been working with me on her own eating issues. The school’s Get Fit night, together with the BMI materials send home, were nothing short of triggering. While well intentioned, the evening’s focus on eating less and exercising more, a seemingly harmless message, was not a healthy message for someone struggling with food restriction issues.
One-size-fits-all recommendations can often do more harm than good. Simple nutrition overgeneralizations, classifying foods into good and bad categories only leads to trouble. While the school meant well trying to control obesity, sending the message of eat this, not that teaches nothing valuable.
It’s kind of like the My Plate message stating that we (all) should Eat Less (http://dropitandeat.blogspot.com/2011/06/time-to-clear-my-plate-before-you-get.html) If 50 or 60 % of all kids are overweight, that means that the rest are not overweight, right?
Did all the Get Fit night guests need to be told to eat less? Did they need to have fats identified by their calorie density, without labeling their many benefits? Did they have to be categorizing desserts as forbidden, while failing to teach self-regulation and balance?
Hard and fast rules and simplistic messages are not the answer for weight management. A healthy diet includes cupcakes, macarons and chocolate as well as fruits, vegetables, nuts and oils, dairy and lean meats. It’s all about balance.
Counseling an overweight preteen as well as his anorexic mom forces me to think carefully about what war we really should be fighting. Should the focus be on what foods to include and which to omit from the diet? Should I encourage some foods for a mom, while forbidding those items from the son’s diet? Not a chance. Whether underweight or overweight, the message is strikingly similar—honor your body and respect its needs. And if hunger and fullness awareness feels foreign, trust that you can re-learn them.
As for Sean, his BMI has dropped significantly, as a result of a slow reduction in weight while his growth has continued. He still enjoys his favorite foods, including ice cream and French fries, but is starting to determine when he has had just enough. And this summer, now that he is out of school, he’ll be spending a lot more time cycling, with minimal TV time. That is, when he’s not watching the Tour De France.
Posted by HikerRD at 8:12 PM

Email ThisBlogThis!Share to TwitterShare to FacebookShare to Pinterest
Labels: Anorexia, Balance, BMI, Changing your thoughts, Desserts, Exercise, My Plate, Obesity, Recovery, Share This With Your MD