What I've Learned About Food Addiction

I'm addicted to desserts and I can't keep them in the house. They just call to me. I can't simply eat a piece or a small portion—no, not me.  Once I start I can't stop and I have to eat them until their gone or I need to throw them in the trash—although sometimes, I’m embarrassed to say, I dig them out of the trash because I just can't let them slip away. And I never know when I'll get to eat them again. Avoidance—total avoidance seems like the only way—yet it never seems to work. I just have no willpower.

No, that's not me speaking—although these statements were certainly true for me at some point in my life. Yes, that time in my early twenties when my eating was emotionally driven and I had no idea what hunger and comfortable fullness felt like.  Rather, the comments above were spoken by many patients that walk into my offices—by the overweight who have unsuccessfully struggled to lose some weight with rigid diets and deprivation, and by those of average weight and below who now approach food in a black and white way, seeing food as the enemy.

And why wouldn’t they, and you, feel that there is no hope, that you must be addicted to food in the way others are addicted to drugs? The debate about food addiction has again emerged, with media distortions and outrageous researcher conclusions on rat studies and MRI findings. And it will leave you feeling hopeless—unless you see how you are being manipulated and left to believe you are powerless.

The Wall Street Journal put out a rather balanced piece on food addiction. Yet the NY Times article on this subject is an embarrassment.  "Can Food Be Addictive?" makes reference to several studies suggesting that overeating is an addiction, perhaps not much different than addictions to drugs and alcohol. The examples cited?

"...Princeton University and University of Florida researchers have found that sugar-binging rats show signs of opiate like withdrawal when their sugar is taken away — including chattering teeth, tremoring forepaws and the shakes. When the rats were allowed to resume eating sugar two weeks later, they pressed the food lever so frantically that they consumed 23 percent more than before", they tell us.

Well, I’ve never had my paws shake and my canines never chattered, but this sounds like sugar dependency is a serious culprit! That’s what they’re leading us to believe. But a more detailed review of this 2011 study sheds a whole different light on things. We learn that rats were first deprived, going 12 hours without food to eat, prior to being given the sugar solution. And, this binging was dependent upon the timing of the feeding. One blog describes how "... rats who had received only the food chow on this intermittent schedule, or had unrestricted access to food and sucrose, did not show these effects." That's right—not depriving the rats and actually allowing them access to food including sugar prevented binge eating. The blog reporting on this study appropriately summarizes:

“This means that after being deprived of the food or drug the rat will self-administer extremely large quantities of the substance once it is available again. This behavior tapers off once the animals are sated, but these binges will consistently occur after each period of deprivation.”

Ok, so they binged when given sugar. But more importantly the research actually confirms the very problem with food deprivation and the resulting out of control eating that we see in our clients who feel trapped in this cycle. No, there was no problem when they could freely feed on food and sugar as desired. Rather, the problem with binging resulted from the withholding of food for long periods, which set the rats and sets my rat-like readers up for trouble.

Might I add that we are not rats in our ability to step in and change our situation. We are not limited to our cages—we can choose to step out of our environment and to control our triggers. And we can certainly avoid deprivation—the biggest trigger for binge eating. You didn’t need a rat study to tell you that, though!

Another study referenced by the NY Times article to support the food addiction theory drew equally absurd conclusions. Researchers at Oregon Research Institute surveyed 151 teens who were in a healthy weight range about their eating habits and food cravings. Then they did brain-scan studies on them while the kids looked at pictures of chocolate milkshakes—more activity in the brain was considered to be linked with greater cravings. Next, they gave them a milkshake to drink while they were having an MRI scan. The kids who'd reported eating the most ice cream over the past few weeks prior to the MRI scans registered lower activity in their reward centers from the milkshake—in other words, less craving for the milkshakes. To me that’s a good thing. Those very kids who had access and consumed these items regularly did not have their brains light up as if they were getting some big reward when offered a milkshake—no, it was no big deal to them.

Yet the NY Times states that these findings "suggest that just as drug abusers and alcoholics need increasingly larger doses over time, children who are regular ice-cream eaters may require more and more ice cream for the reward centers of their brains to indicate that they are satisfied."   One study author similarly concludes that not having as great a response to eating the food (based on MRI) is problematic—that “over consumption of these foods down regulates reward processes. That may, in turn, make you eat more." Really? That's quite a strange conclusion to draw, in my opinion, especially as these kids were not overweight. (in spite of their more frequent ice cream consumption.

Further, this study attributes possible addictive-like qualities of ice cream shakes, made with Haagen Daz ice cream, to the high fat content.  But if it is about the fat, why don’t we have addictions to such high fat items as prime rib or deep fried chicken? Or whole milk, even? No, this just isn’t seen.

So maybe it's not the nutrient, the fat or sugar (as implicated above) content at all but the conditions under which we eat. Is it any surprise that those reward centers of the brain would light up in MRIs, similar to what occurs with other addictions, when these very food items are used in our culture as rewards? You know, you had a hard day, so you indulge yourself with an ice cream, ironically just as the old Haagen Daz ads suggested? Or as a young child, you scrape your knee and your mom gives you some cookies to feel better. If we could only allow ourselves to enjoy such pleasurable foods as ice cream without the value judgment we add to it!

What's not in question is how you feel. Clearly, when you experience out of control eating you feel as if your are addicted to food—that you have no control over certain food items or types and that it therefore must be out of your hands to seize control. And with the recent studies I referenced, you might be convinced this is true. But the only clear link with what feels like food addiction is food deprivation.

Continuing to use food as a reward for a hard day or for eating healthy all week is a huge mistake.

If you’re feeling like you’re addicted to food, consider changing your relationship with food and move from black and white thinking, giving yourself permission to eat those foods you enjoy but think are forbidden.

Eat in a balanced way--and I don't mean by following the My Plate way. Rather, make the foods you eat enjoyable. Sure, include satisfying less processed foods, too--but not at the exclusion of other foods. 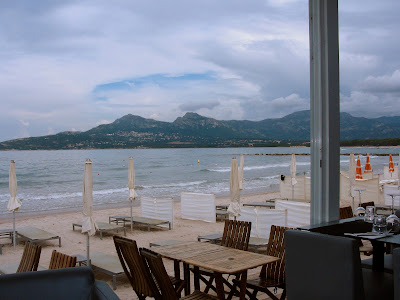 And take charge of your environment—focus on mindfully eating and truly enjoying your food so you know when you have eaten just enough.

Read more about this approach in some older posts below: