Struggling With Your Eating? Carrot Cake May Be The Answer. 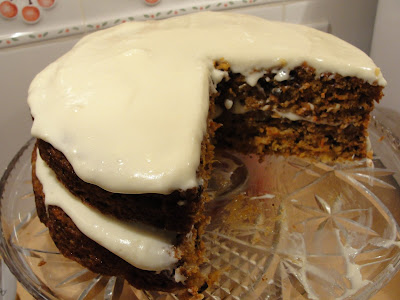 I ate too much. I kid you not. Eight days filled with fried foods is weighing me down. And while I don’t celebrate Christmas, it happens to be my husband’s birthday. So I made the obligatory carrot cake with cream cheese frosting—his favorite—a total yum— and probably ate a bit more than was necessary. And that was after the Indian food we had out—shared lentil soup, appetizers—the works.
Having my jeans fit rather tightly can be challenging even if I needed to gain some weight—which I don’t. Somehow, there’s just no positive reinforcement in our culture for having your waist band cut into your flesh—even if it’s truly a sign of progress, of necessary weight gain for recovery. Growing out of your clothes (unless you’re an adolescent, entitling you to indulge in the newest fashions) yields little benefit in our society. But in my case, that’s beside the point. My personal goal is maintenance, within my normal and healthy weight. 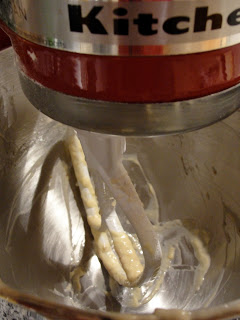 Yes, even nutritionists can, and do, overeat at times. Of course I know better, yet I found myself grazing on salted, roasted cashews rather mindlessly while mixing up the carrot cake batter. And serving the cake from the table? Big mistake. It called to me, a mere arms-distance away. Those skinny, knife thin slivers don’t really count, do they?
What did I resolve when I woke up this morning? First, I wouldn’t dare consider weighing myself—no need to see what I already knew. I might have considered a bowl of bran flakes or oatmeal. But I really felt like having the freshly baked bread I made the night before. (I was rather productive on Christmas, wasn’t I?) 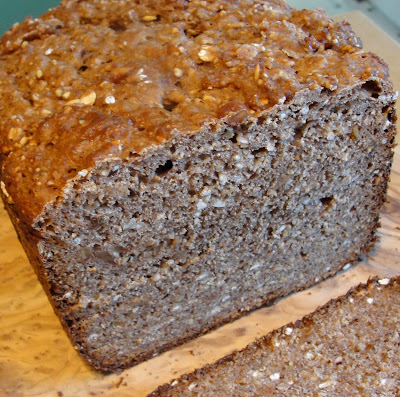 Rather than have the cereal while yearning for the bread, I decided to have what I really wanted. And so I cut a thin slice of this rather dense, wholesome bread, chock full of oats and flax, figs and walnuts, seasoned with anise seed, and had a bowl of yogurt and fig jam to go with it. And, had my coffee, of course.
What I didn’t resolve was to make up for the extras consumed in the many days before. I did not resolve that I blew it, that I shouldn’t even bother, because it’s useless. Or, that the leftover carrot cake was to be trashed, so that I wouldn’t eat it again. I wouldn’t dream of such a thing (besides, my husband would probably fish it out of the trash barrel if I did). And if I did, it would only reinforce that cakes were something I wasn’t entitled to eat, so it was now or never when they were within my reach. This, of course, would only lead to overeating. I did, however, slice it up, wrapping each slice individually, and froze it.
I did not resolve to skip my usual workout, or my walks with Mica (you know who he is, by now, right?), because “why bother?” I love my treks through the woods by my home. It’s hard to know who gets more excited at the sight of a squirrel—me, or Mica. 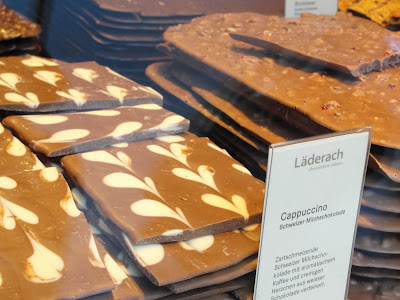 Yes, it’s a process. We all need to remind ourselves of what is in place, rather than focusing on where we slipped. This morning’s Skype session with a client overseas addressed, in part, expectations. It came naturally to Anna to focus on the fact that her weight had not yet improved. But the positive changes she has been making were far less obvious to her, and certainly more difficult to measure. She needed to recall that having two chocolates, only two, was in fact, progress. Yes, there was a time, not too long ago, that she would have laughed when I suggested this was possible; chocolate was something to be avoided, when trying to manage weight, for fear that once she started she’d have no control over stopping.
Being able to distinguish her hunger—and her fullness—has also been a major recent achievement. Previously, without this awareness, she was left without the tools to self-regulate food intake. One night this week, she chose to have a snack, responding to this hunger, prior to dinner being ready. As a result, she was left with little hunger at mealtime. She gave herself permission to delay dinner—rather than eating it at the planned time—another step forward in listening to her body’s signals. She knew she could, and would, eat again later when she needed to. The fact is, as a result, she ended up being more in control of her eating, versus overeating. 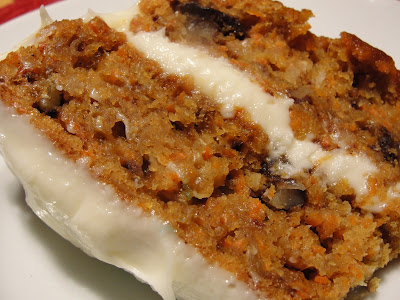 But if the only goal is pounds lost, then she made no progress this past holiday week at all. Anna needed to revisit the house-building analogy, to shift her focus on what’s truly important at this stage of our work together. Building her foundation is a necessary first step to changing her relationship with food—and ultimately her weight.
As for me, I did have a lighter dinner this evening—a root vegetable soup, accompanied by the sliced homemade bread. And, I mindfully enjoyed every bite of the microwave-defrosted slice of carrot cake.
And I’m feeling quite good.
PS: Here's the recipe some of you requested!
Joel's Birthday Carrot Cake
Ingredients
2 cups flour
2 cups sugar
2 tsps baking soda
2 tsps cinnamon
1/2 cup oil
1/2 cup unsweetened applesauce
3 eggs
2 tsps vanilla extract
3 cups finely grated carrots
1 cup walnuts
1/2 cup shredded sweetened coconut
3/4 cup drained crushed pineapple
(See Cream Cheese Frosting Recipe below)
Preheat oven to 350 degrees F.
Line 2 round cake pans with wax paper, then grease or spray them. (a  13 X 9 inch pan works fine too, but doesn't look as awesome!)
Blend the dry ingredients in a mixer.
Add the next ingredients, through vanilla, beating thoroughly.
Then fold in remaining ingredients.
Pour batter evenly into the two pans.
Place in middle rack of oven.
Bake approximately 1 hour, or until the edges pull off the sides or a toothpick comes out clean when inserted into the center of the cakes.
Let cake cool 10 minutes in the pans. Then flip them over onto plates or cake platter. They should fall from the pans with ease.
Peel off the wax paper and let cool an hour.


Cream Cheese Frosting
12 oz reduced fat cream cheese or Neufchatel (brick form), room temperature
4 Tbsps (1/2 stick) unsalted butter, room temperature
1 1/2 cups confectionary sugar
1 tsp vanilla extract
2 Tbsps milk
Blend it all until smooth, without lumps, and it's ready to use.
Frost one whole cake. Then drop the second cake onto the first and frost top and sides.
Sit down with a slice, and enjoy every bite. Remove the rest from the counter, by slicing and removing the pieces from view (freezing is ideal!)
Posted by HikerRD at 6:23 PM