Do Dogs And Toddlers Calorie Count?

This is my dog. 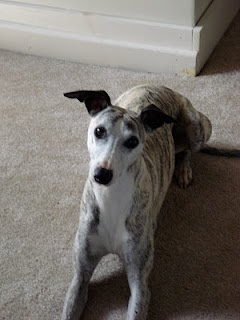 And this is a toddler.
Both adorable, no?

Now what, you may be thinking, does this have to do with your blog “Drop It And Eat”? Well, the way I see it, we can learn a lot from observing both dogs and toddlers regarding eating.  So I’ll start with dogs.
When my dog, Mica, rises, he typically makes it clear when he is hungry and needs to eat. He strolls over to his feeling place, looks down at his bowl and glances back up at us, if we are present. If we are not observing him (which is unusual), he gives a whimper, translated as “please feed me—I’m hungry”. And so we do, and the whimpering ceases. We fill his bowl with dog chow, and he proceeds to eat. And then he stops. He doesn’t clean his plate, so to speak.  There is typically food which remains late into the day, when he will graze again, presumably because he is hungry. We never remove his food or deny him nourishment when he gives us the cues that it’s feeding time. And he also gets plenty of exercise. He is and has always been a normal weight for his breed (he’s a whippet), has had no liposuction and has never, to my knowledge, counted his calories. And he frequently is found eating after 8 PM.

There are quite a few similarities between Mica and toddlers I have observed. They make it clear when they need to eat, as well as when they’ve had enough. You know, tossing food off the high chair, playing with the items they have no interest in. We’ve all seen it. And when we look at the growth curves of most young children, it’s clear that they know best. They tend to follow a percentile curve that’s right for them, (those weight charts doctors plot to measure how well kids are gaining and growing), suggesting normal weight gain each year.  It’s generally when we mess with things that this self-regulation fails. When we set inappropriate rules, reward with food (finish your chicken and then you can have the cookies!) or withhold food. But for the most part, when they are offered a balanced diet and have their signals respected they gain appropriately.


So what can we learn from canines and toddlers? We can take a few lessons from their dietary self-regulation and lack of rules driving their eating. And if you weren’t a healthy toddler whose cues were appropriately listened to (or a healthy canine), it’s not too late to start learning to tune in.
Posted by HikerRD at 2:56 PM

Email ThisBlogThis!Share to TwitterShare to FacebookShare to Pinterest
Labels: Calories, Feeding the kids